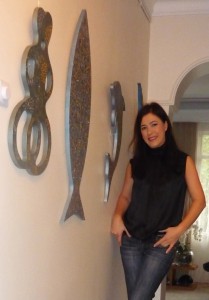 She did not get any academic education or a course on painting. In 1998 she has learned and experienced Reiki (Universal Life Energy). Her spiritual transformation process is still progressing by the addition of other life therapies like yoga, Tao magic, relaxology, feng-shui etc. Fallowing to death of her mother in 2003; she has seen herself sitting in front of painting board during one of her Reiki sessions. This has been a starting point for her painting experience. As she has continued to see the same image in her dreams and meditations, she believed that this is a kind of spiritual guidance for her. She made her first painting by performing Reiki.

As she has continuously inspired by the same spiritual images, after a while, the art of painting has become a part of her life. She has opened her first personal painting exhibition just one later in October 2004.The theme of the exhibition was ’the paintings with flow of energy inside’

The forms she uses in her paintings are symbols;

Moon: water, new beginnings, energy to change, transformation, letting yourself to go with the flow and power of feeling the re-start

Colors of life: trees which symbolises the unlimited energy, potential to create and endless colours.

She believes that her paintings which are made of plain and peaceful mystical symbols bring a kind of alchemy effect in to her life. She thinks that the sparkles that she uses in her paintings renews, increases its own energy and then it reflects back to herself and to the viewers. We hope that it would reflect to you as well.

November-December 2004-’the paintings with flow of energy inside’- www.nevarneyok.com

February 2005-Everything is for love – www.nevarneyok.com